You are here: Home / Courses / Executive Function: The Missing Diagnosis 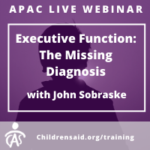 Please note: Internet Explorer is not a supported browser.
For Best Results please use Chrome, Edge, Firefox, or Safari.

Got it!
X
Course Quality Survey
Please let us know how we're doing by filling out this simple form!